MASAGRO in Mexico: You Cannot Walk the Road to Food Security Alone 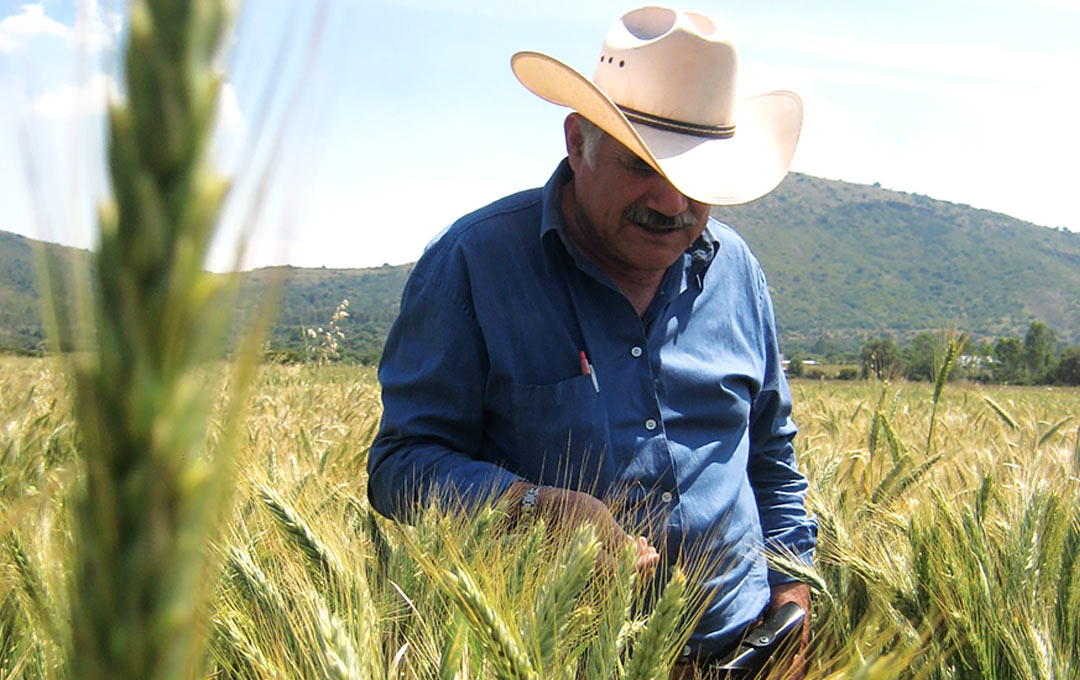 Wheat research under the Mexico-based Sustainable Modernization of Traditional Agriculture (MasAgro) program excelled in both internal and external reviews in 2013. MasAgro has greatly improved the livelihoods of participating farmers.

Increasing the profitability of wheat in Mexico by an estimated US $35 million in 2013, reaching some 50,000 farmers and benefitting about 200,000 people are a few of the achievements reported by MasAgro for 2013. In the leading Mexican wheat-producing state of Sonora, Jesús Rafael Valenzuela Borbón said MasAgro has helped him promote conservation agriculture, which provides higher yields in dry conditions. Valenzuela is in charge of a conservation agriculture experiment site near Navojoa, where he is growing maize and wheat in rotation. “The results are very favorable,” he said. 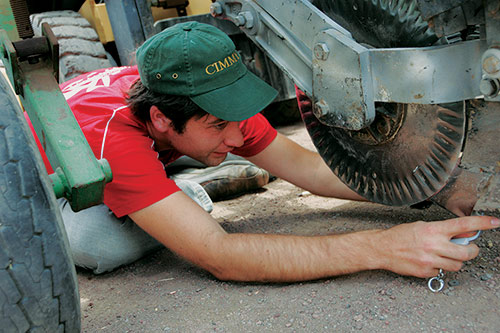 A joint effort funded by Mexico and launched in 2010 by Mexico’s Secretariat of Agriculture, Livestock, Rural Development, Fisheries and Food (SAGARPA) with CIMMYT, MasAgro works with 180 partners – Mexican research organizations, policymakers, farmers and private companies – to strengthen national food security through research, capacity building and technology transfer. For wheat, partners test and promote the adoption of conservation agriculture and precision agriculture practices to increase yields, improve farm household incomes, reduce environmental impacts and mitigate climate change. Already practiced widely in Europe, North America and the Southern Cone of South America, conservation agriculture means reducing or eliminating plowing, keeping residues from previous crops on the soil surface and using strategic rotations. Research and extension hubs for Mexico’s main farming systems or ecologies are MasAgro’s platform of choice to perfect and pass on innovations. Experiments in each hub test selected technologies locally, as well as mobilizing research and information exchanges among scientists, extension specialists, farmers and others connected to agriculture. The experiments are in turn attached to on farm modules – there are now more than 1,400 throughout Mexico – where farmers try out new practices and report impressions to peers and researchers.

Second only to maize as a major food crop in Mexico, wheat is grown on some 600,000 hectares and provides 8 percent of Mexicans’ daily calories by way of pasta and diverse baked or processed foods. The country produces about 3.3 million tons of wheat per year, but recently has imported as much as 4 million tons yearly to satisfy national demand (FAOSTAT 2014). At the same time, soils in many wheat farming areas are degrading and water resources are overexploited and growing scarcer. Finally, Mexico is among the countries where climate trends since 1980 have slowed wheat yield gains.1 “In addition to making better use of available water and crop nutrients, conservation agriculture cuts wheat farmers’ production costs by greatly reducing tractor use,” said Bram Govaerts, associate director of CIMMYT’s Global Conservation Agriculture Program and MasAgro coordinator.

New technologies tested and promoted with farmers by MasAgro help ensure that just the right amount of fertilizer is applied precisely when plants need it. “Adoption of GreenSeeker®, an inexpensive handheld sensor of reflected light that measures biomass, has brought Mexican farmers savings in 2013 estimated at US $1.7 million,” said Govaerts. “Decreasing fertilizer use also lowers greenhouse gas emissions and nitrate runoff into water systems.”

In the latest development, satellites serve as remote sensors to assess crop health and fertilizer needs. “As part of WHEAT, MasAgro worked with Mexico’s Servicio de Información Agroalimentaria y Pesquera (SIAP) to develop and launch ‘GreenSat’ during 2013,” Govaerts said. “This web-based system allows farmers to use SPOT-6 satellite images of wheat-growing areas to calculate optimal nitrogen fertilizer dosages.” Over 2014, the system will be operational in four major wheat-growing areas of Mexico. Finally, Mexico is among the countries where climate trends since 1980 have slowed wheat yield gains.

Back on the ground, conservation agriculture relies on specialized implements such as attachments that can reliably sow seed through crop residues into untilled soil. MasAgro’s mechanization unit develops appropriate implements for large- and small-scale farmers in settings from irrigated flats to rain-fed hillsides. The team exploits 3-D design programs, computer simulations to test machinery and extensive trials in farmers’ fields. Some 500 Mexican farmers and 100 manufacturers and machinery service providers attended agricultural engineering workshops organized by MasAgro in 2013, learning about and commenting on new designs. Through MasAgro, direct seeding implements developed by WHEAT in South Asia were imported and adapted for use in Mexico. In turn, a successful implement designed for two-wheel tractors in Mexico is being tested in Africa and Asia. Future innovations will include on-the-go, sensor-based fertilizer application systems and more sophisticated machinery featuring mechanical, electrical, telecommunications, control and computer engineering components.

Linking Farmers with Technical Support and the Full Value Chain 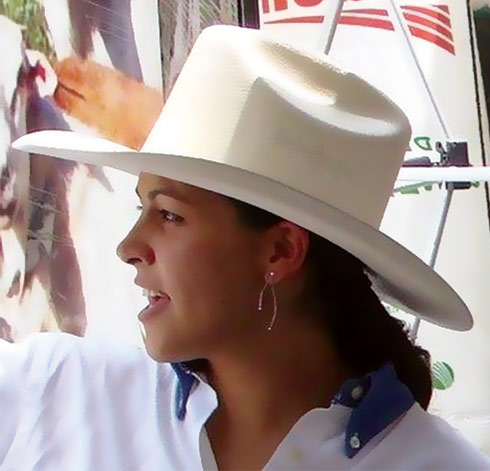 Gloria Melendez Roca, director of rural development for the Secretary of Agricultural Development (SEFOA) in the Mexican state of Tlaxcala, was proud that, with 19 certified technicians, her state is among those with the greatest number of these highly-trained professionals.”We’ve learned a lot,” Melendez said, referring to Tlaxcala’s participation in MasAgro.”This has been a new experience and we’re adapting to farmers’ needs”.

Using mobile phones and the Internet, MasAgro has assembled standardized e-log books containing detailed information on the farms and practices of some 20,000 maize and wheat farmers in Mexico (the number grows as you read this). The log books are connected to a GoogleEarth™-based visualization tool; clicking on a point brings up information on the location, the farmers, the crops and cropping systems and specific practices used.

MasAgro is taking full advantage of farmers’ growing use of cellular telephone technology and social media to access market, crop management and other useful information. A pilot SMS service for farmers – MasAgro Móvil – was launched in July 2012 and now reaches 3,700 farmers and the number is growing. The service was recently recognized by the Inter-American Development Bank (IDB) as an innovation for food security in Latin America.

Over three years, a rigorous MasAgro course to formally certify conservation agriculture technicians has trained more than 180 graduates who work with more than 2,000 Mexican rural extension agents to reach farmers.

Working pro-actively through political channels, often at the behest of and with support from farmers, has greatly enhanced MasAgro’s effectiveness. As one achievement of that approach, 10 major agricultural states of Mexico have signed agreements to align their agricultural development agendas with MasAgro. Gloria Meléndez Roca, director of rural development for the state of Tlaxcala’s Secretary of Agricultural Development (SEFOA), recounts that for Tlaxcala this occurred in 2012, when the governor charged SEFOA to find solutions for a farm sector dominated by rain-fed, smallholder agriculture on Mexico’s poorest soils. “One day a certified conservation agriculture technician came to our offices and mentioned MasAgro to me,” Meléndez recalled. “He said ‘why don’t we talk to CIMMYT.’ Afterwards we all put our heads together and an agreement to partner with MasAgro was signed.”

Govaerts said the lesson of MasAgro in Tlaxcala is that to achieve desired results, you need to consider farmers, the state and federal governments, agricultural organizations, companies and foundations as “part of the team, because you cannot walk the road to food security alone.”