WHEAT Rises to Meet Challenges and Demand in Ethiopia 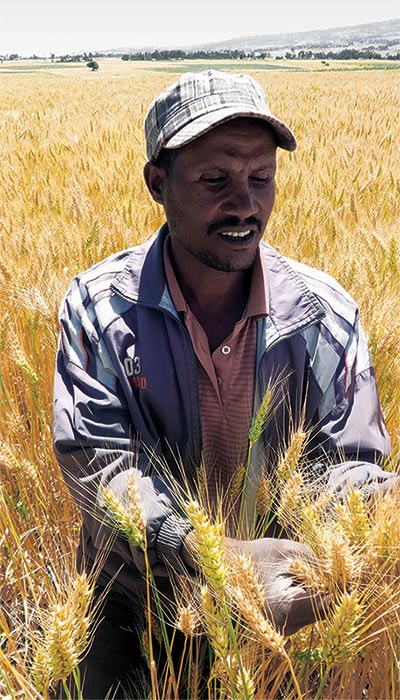 Farmers are also experimenters. Behailu Metaferia, a farmer from Shorima Village, Oromia Region, Ethiopia, sows a range of improved varieties of his chief crop, wheat, to test them and to produce food and seed. Seed sells for 40 percent more than grain. “Last year I harvested 15 quintals (1.5 tons) of wheat seed,” Metaferia said. “I saved four quintals to sow this year and sold the rest to neighboring farmers.” He and his family grow teff, the native Ethiopian grain used in the popular fermented bread injera, as well as fava beans, peas and maize, and keep farm animals that include several dairy cows.

Concerted action and high-yielding, disease-resistant varieties from WHEAT partners, along with supportive government policies and better cropping practices, have caused Ethiopia’s wheat production to more than double in a decade, rising from 1.60 to 3.92 million tons from 2003-04 to 2013-14. Food security has measurably improved in households that have taken up the improved wheat technologies. Despite this, rising demand and evolving pathogens doggedly challenge Ethiopia’s wheat farmers and those who support them.

More wheat growers in Ethiopia are using high-yielding, disease-resistant varieties, as well as improved practices like row planting and fertilizer and herbicide applications, according to Bekele Abeyo, CIMMYT wheat breeder/ pathologist for Sub-Saharan Africa who is based in Ethiopia. “About 4.7 million farm households – more than one-third of those that grow cereals – depend on wheat,” said Abeyo. “Average wheat yields on Ethiopian farms have risen from about 1.47 to 2.45 tons per hectare (t/ha) since 2004, and the impacts on food security are significant.”

A 2014 nationwide study published in Food Policy and involving more than 2,000 farm households in Ethiopia’s major wheat-producing areas revealed that those who adopt improved wheat varieties are able to spend more on food, are more likely to be food-secure and are less likely to suffer chronic or transitory food shortages.

Sub-Saharan Africa’s largest wheat producer, Ethiopia grows the crop on over 1.6 million ha, with the main production areas concentrated in the country’s Central and Southeastern Highlands. Despite this, with Ethiopia’s rising population and expanding cities, demand for wheat outstrips national supplies and annual imports have topped 1 million tons in recent years.

Eastern Africa: Sowing Wheat in the Cradle of its Crippling Pathogens

Since 1970, farmers have had access to more than 100 high-yielding bread wheat and durum wheat (for pasta and semolina) varieties. These were developed and spread through collaboration among WHEAT partners, including the Ethiopian Institute of Agricultural Research (EIAR), Ethiopia’s regional agricultural research institutes (RARIs), ICARDA and CIMMYT, a center whose work has contributed to 80 percent of Ethiopia’s wheat varieties. Despite the availability of improved varieties, wheat productivity gains were modest for many years, held in check by sub-optimal agronomic practices, limited use of inputs such as inorganic fertilizer, lack of effective seed systems or farm credit, unstable prices for wheat grain and – most damaging of all – periodic droughts and wheat disease outbreaks.

“The value of RustTracker was demonstrated in early 2013, when serious outbreaks of yellow rust were observed from North Africa to South Asia.”
–Dave Hodson,Coordinator of the Global Cereal Rust Monitoring System 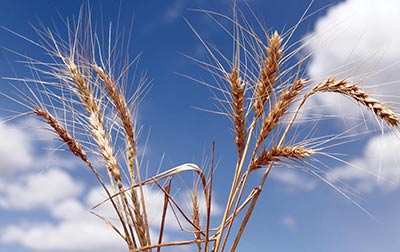 One result was the Borlaug Global Rust Initiative (BGRI), initiated by CIMMYT, the Indian Council of Agricultural Research (ICAR), ICARDA, the Food and Agriculture Organization (FAO) of the United Nations and Cornell University in 2008. Fostered by the Durable Rust Resistance in Wheat (DRRW) project and led by Cornell, with funding from the Bill & Melinda Gates Foundation and the Department for International Development-UK, the Initiative marshals scores of scientists in work to develop and spread improved varieties that resist stem, yellow and leaf rust.

With leadership from EIAR, RARIs and the Ministry of Agriculture, and strong support from CIMMYT and ICARDA, Ethiopian farmers have gained access to a new generation of high-yielding, rust-resistant wheat varieties from BGRI, through ICARDA-led efforts to tackle yellow rust and from other sources. Key to this were seed multiplication and distribution efforts funded by the U.S. Agency for International Development (USAID), as well as seed production by ACDI/VOCA, the Alliance for a Green Revolution in Africa (AGRA), the Eastern African Agricultural Productivity Project (EAAPP), FAO and the Ethiopian Agricultural Transformation Agency (ATA).

Wheat is a strategic food security crop and ever-more expensive to import, so the Ethiopian government has invested heavily in boosting wheat production. Measures include making seed of improved wheat widely available, spreading better practices like row planting and fostering farmers’ access to fertilizer and fungicides.

As part of DRRW, CIMMYT has led the development of a sophisticated, multi-partner wheat disease monitoring and response system known as RustTracker that has directly benefited Ethiopia. “The value of RustTracker was demonstrated in early 2013, when serious outbreaks of yellow rust were observed from North Africa to South Asia,” said Dave Hodson, coordinator of the Global Cereal Rust Monitoring System at CIMMYT who created and manages RustTracker. “This prompted an alert for the East African region and resulted in mitigation efforts in Ethiopia, including comprehensive major and minor season surveys, timely control in infected areas and frequent information exchange amongst stakeholders.” The widespread adoption of resistant varieties and this effective surveillance and control program helped Ethiopia to head off a potentially massive yellow rust outbreak in 2013-14 and attain a record wheat harvest.

Matching the Rise of Lethal Fungi 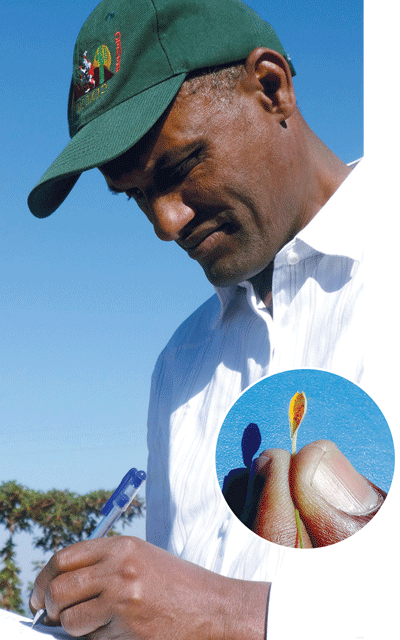 Bekele Abeyo, CIMMYT wheat breeder/pathologist for Sub-Saharan Africa, scores the resistance of experimental wheat plants to the fungal disease yellow rust at Bekoji Research Station, Oromia Region, Ethiopia. “Spores like these can sail on the wind to other plants, fields or regions,”he explained, showing a wheat glume filled with the yellow powder of rust spores.

Adoption of rust-resistant wheat varieties is expanding but pathogens are also evolving, so large areas of wheat can quickly become disease-susceptible, according to Hodson. “There’s no freezing winter in Ethiopia to break fungal growth,” he explained. “Wheat production is continual and new, highly-virulent strains can develop quickly. As a result, resistance has broken down in many older Ethiopian wheats and several more recent releases.” Despite this, certain old varieties are still widely grown, Hodson said, citing the case of the popular 1995 release, Kubsa. “Its original resistances to yellow and stem rust are no longer effective, but farmers still sow Kubsa on more than a quarter of a million hectares.”

A severe, localized epidemic in late 2013 showed the wildfire nature of rust attacks. “A deadly new stem rust strain hit 10,000 hectares or more in the Bale/Arsi wheat production zone,” said Hodson. “The current most popular variety in Ethiopia, Digalu, is resistant to yellow rust and the Ug99 stem rust races, but was totally susceptible to the new strain, and there was nearcomplete grain damage in fields that hadn’t been sprayed with a good fungicide.”

Farmer awareness has grown, but selecting and releasing truly resistant varieties is a big challenge, according to Solomon Galalcha, former Director of EIAR’s Kulumsa Agricultural Research Center. “In most nurseries here, we discard as much as 60 percent of the lines because they prove susceptible,” he said. Located in the Ethiopian highlands some 170 kilometers (km) southeast of the capital, Addis Ababa, Kulumsa is one of the three key sites in eastern Africa (the others are Debre Zeit Agricultural Research Center, Ethiopia, and Njoro, Kenya) where researchers test thousands of wheat lines each year under intense attack from naturally occurring rust.

Rather than seeking varieties with major genes, each alone able to withstand a specific rust race or group of races but whose effects can be overcome by a mutating pathogen, breeders now select for combinations of several minor genes that individually might only slow disease development but whose pooled effects can confer high levels of immunity, according to Ravi Singh, CIMMYT wheat breeder and distinguished scientist. “As with a combination lock, if you put more numbers in the combination, the lock is harder to pick,” he said. “Similarly, a pathogen is unlikely through natural mutation to overcome the effects of multiple, minor resistance genes, which often act synergistically and whose effects are not targeted to a single race or race group. This type of resistance can last longer.”

In addition to crop diseases, the challenges for Ethiopian wheat farmers are diminishing land holdings, soil degradation, erosion and scarce water, according to Abeyo. “To be sustainable,” he explained, “the high wheat yields we see now must be accompanied by more sustainable management of resources like farmland and water.”

Getting Wheat Back on the Map in Africa 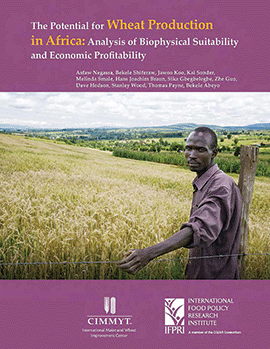 Efforts to put wheat on the food and trade agenda in Africa came together at the Forum for Agricultural Research in Africa (FARA) meeting in Accra, Ghana, in July 2013, when 30 senior research, development and policy experts met with WHEAT representatives to develop a strategy for promoting African wheat production and markets.

Food preferences in Sub-Saharan Africa have been shifting for decades from traditional staples such as coarse cereals to wheat and rice. Now, urbanization, a growing middle class and changing lifestyles, including women who work, are driving a rapid rise in demand for wheat, but production in the region falls short and consuming countries draw on foreign reserves to import at least US $12 billion-worth of grain each year. “Most countries produce less than a quarter of what they could,” said Bekele Shiferaw, former director of CIMMYT’s socioeconomics program and key author on a major 2013 study on the suitability and profitability of wheat for Africa by CIMMYT and the International Food Policy Research Institute (IFPRI). “There are many opportunities to raise wheat area and yields.”

A groundbreaking 2012 conference, Wheat for Food Security in Africa in Addis Ababa, organized by EIAR, CIMMYT, ICARDA, IFPRI, the African Union (AU) and WHEAT, led to the endorsement of wheat as a strategic crop for Africa by AU agriculture ministers, an endorsement officially noted by AU heads of state in early 2013.

“The idea now is to put together all the actors – on the production side, in legislation and in markets,” said Victor Kommerell, WHEAT manager. “The focus is to gather more evidence on production and market potential, on how to bring wheat into existing farming systems and particularly smallholder farmers’ chances to grow it as a cash crop. Then we look at future consumption and regional trade.”